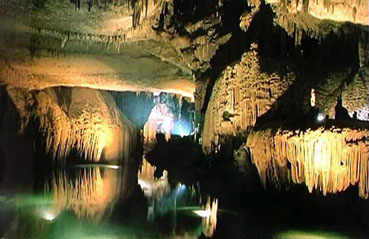 Few caverns in the world approach the astounding wealth or the extent of those of Jeita. In these caves and galleries, known to man since Paleolithic times, the action of water has created cathedral-like vaults beneath the wooded hills of Mount Lebanon.

Geologically, the caves provide a tunnel or escape route for the underground river, which is the principal source of the Nahr el-Kalb (Dog River).

Located some 20 Kilometers along the highway North of Beirut, a large sign indicates the right turn from Zouk Michael village, just beyond the tunnel. The caverns are on two levels. The lower galleries, discovered in 1836 and opened to the public in 1958, are visited by boat. The upper galleries, opened in January 1969, can be seen on foot.

To mark the inauguration of the upper galleries, arranged by the Lebanese artist and sculptor Ghassan Klink, a concert was organized in the cave featuring electronic music by the French composer Francois Bayle.

Other cultural events have taken place in this unusual venue, including a concert by the German composer Carl-Heinrich Stockhausen in November 1969.

Jeita remained a popular attraction until the recent Lebanese conflict forced it to close in the mid-1970's. Upon the initiative of the Ministry of Tourism, the German company ''Mapas" was charged to renovate and to re-equip its facilities by the most modern techniques and to operate the complex.