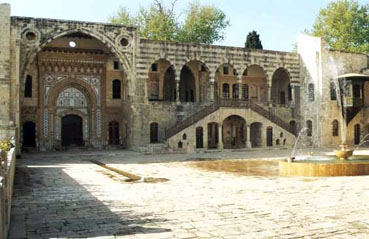 The road to Beiteddine leaves the coastal highway 17 kilometers beyond Beirut, just a few kilometers after the town of Damour. From there it climbs quickly along the beautiful Damour river valley for 26 kilometers to an elevation of 850 meters at Beiteddine.

The Beiteddine palace complex, Lebanon's best example of early 19th century Lebanese architecture, was built over a thirty year period by Emir Bechir El Chehab II, who ruled
Mount-Lebanon for more than half a century

The most spectacular view of the palace and its surroundings is from the village of Deir El Qamar (Monastery of the moon), five kilometers before Beiteddine.