Syrian rebel chief: Fighters 'will not give up' 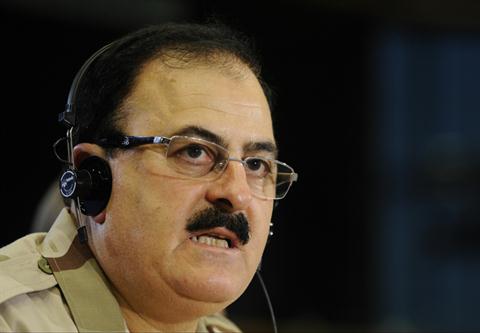 BRUSSELS: The chief of Syria's main, Western-backed rebel group marked the second anniversary of the start of the uprising against President Bashar Assad on Friday by pledging to fight until the "criminal" regime is gone.

Gen. Salim Idris, the head of the Supreme Military Council, called on Syrian soldiers to join the rebels in a "fight for freedom and democracy," and said: "Dear friends, the Free Syrian Army (fighters) will not give up."

In Damascus, authorities beefed up security measures as rebel groups called for stepped-up attacks on government troops and state institutions on the anniversary.

The revolt against Assad's authoritarian rule began in March 2011 with protests in the southern city of Daraa, after troops arrested teenagers who scrawled anti-regime graffiti on a wall. It has since morphed into a civil war that has killed an estimated 70,000 people, according to the U.N.

"We want (a) Syria where every Syrian can live in peace and liberty. This is our dream. This is what we are fighting for," Idris said in a video address obtained by The Associated Press form the military council's media office.

He spoke in an undisclosed location in northern Syria that is under rebel control.

"I know our battle is not so easy. We have to fight against planes, tanks and huge missiles," Idris said. "But our will is still very strong. We will not stop until this criminal regime has gone."

Idris, 55, studied in Germany and taught electronics at a Syrian military college before defecting to the rebel side in July.

In the past year, the rebels have made significant advances on the battlefield, capturing large swathes of land outside of major cities and along the border with Turkey and controlling some areas in the northern city of Aleppo, Syria's largest urban center and its commercial hub. They have also seized border crossings along the frontier with Turkey and Iraq and have overrun major military bases.

They captured dams on the Euphrates River and came within a mile of the center of Damascus, the seat of Assad's power.

On Friday, rebels battled regime forces in several smaller army bases and weapons depots around Aleppo, seizing some ammunition in an army depot near a village of Khan Touman, southwest of the city, according to activist groups.

An activist in Aleppo province, who is widely known as Yassin Abu Raed, said rebels led by the Jabhat al-Nusra and other Islamic radical groups also seized control of a checkpoint protecting a military academy.

Abu Raed, who did not give his real name for fear of persecution by the regime, also said rebels seized a missile base in al-Rashideen area in Aleppo province. Another activist group, The Observatory for Human Rights, said fighting for the missile base was ongoing.

The videos appeared consistent with reporting from the area by The Associated Press.

The rebels have long complained that their side is hampered by the failure of world powers to provide heavier arms to help them battle Assad's better-equipped military and his airpower. The international community is reluctant to send weapons partly because of fears they may fall into the hands of extremists who have been gaining influence among the rebels.

Last month, U.S. Secretary of State John Kerry announced that the Obama administration was giving an additional $60 million in assistance to Syria's political opposition and would, for the first time, provide non-lethal aid directly to the rebels. None of the aid, which is to include an undetermined amount of food rations and medical supplies, has been sent yet.

On Friday, leaders at a European Union summit failed to agree if they should send arms to the rebels.

An EU embargo prohibits any arms from being sent to Syria, whether to the rebels or to the Assad regime. That embargo is scheduled to remain in effect until May, when it will either be renewed or allowed to expire.

On Friday, some anti-government groups called for stepped-up attacks to mark the anniversary of the uprising. The banned Islamist Muslim Brotherhood group urged supporters for a "week of action" on the occasion but didn't specify what it would do.

A Damascus-based activist who identified himself as Abu Qais said regime troops increased patrols and security searches in the country's capital. He spoke on condition his real name not be used for security concerns.

The Lebanese news agency said the incident occurred in the northern city of Tripoli, and that the tankers were carrying fuel when they were stopped by the protesters and later set on fire. No casualties were reported.

In the past, protesters have closed roads to keep tankers from crossing into Syria, where there are severe gasoline and diesel shortages. They claim diesel exported to Syria is being used by regime tanks.

Many among Lebanon's Sunni Muslims have backed Syria's mainly Sunni rebel forces, in which radical Islamists have become increasingly active. Lebanese Shiite Muslims, including the militant Hezbollah group, have leaned toward Assad, whose tiny Alawite sect is an offshoot of Shiite Islam.

Separately, the Syrian Foreign Ministry complained in a letter sent to the Lebanese government on Thursday that armed groups have tried to infiltrate Syria from Lebanon repeatedly in the past 36 hours, triggering clashes with border guards.

Damascus said Syrian troops have exercised "utmost self-restraint" until now but warned that "this would not continue endlessly."

Also on Friday, at least eight Syrians were killed and 29 were injured when the bus they were traveling in from Syria overturned in the mountains in central Lebanon, officials said. The bus was headed to the Lebanese capital, Beirut, when the accident occurred in the Kahhaleh region.

George Kettaneh, operations director for the Lebanese Red Cross, said the casualties included women and children. He said it's unclear why the bus overturned.

It was not immediately known whether the Syrians were refugees fleeing the violence at home. The bus had Syrian license plates from the northeastern Hassakeh province, which recently witnessed heavy clashes.

More than 1 million Syrians have fled the country's civil war to seek shelter in neighboring countries. In Lebanon alone, the U.N. has registered more than 360,000 Syrian refugees.