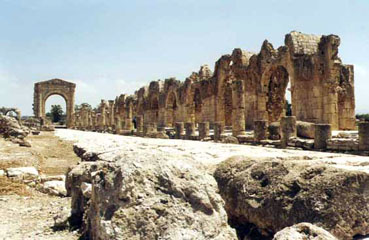 Phoenician Tyre was queen of the seas, an island city of unprecedented splendor. She grew wealthy from her far-reaching colonies and her industries of purple-dyed textiles. But she also attracted the attention of jealous conquerors among them the Babylonian King Nebuchadnezzar and Alexander the Great.

Tyre has a colorful souk (covered market) well worth exploring. Look for the Ottoman khan, or inn, just inside the market entrance. On a side street is the "Mamluke House", an Ottoman period residence that is being restored as a cultural heritage and information center by the General Directorate of Antiquities.
Near the market you will see a busy fisherman's port, in Phoenician times referred to as the "Sidonian" port because it faced north towards Sidon.

Walk along the port with the sea on your right and you enter the city's Christian Quarter, a picturesque area of narrow streets, traditional architecture, and the Seat of the Maronite bishop of Tyre and the Holy land. One medieval tower still stands in a small garden. A second one is visible under the little lighthouse. During Crusader times towers similar to these ringed the city.