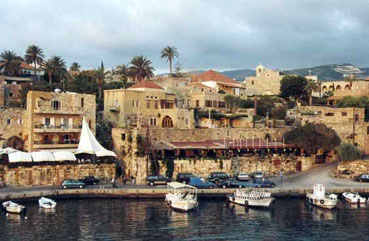 Byblos is one of the top contenders for the "oldest continuously inhabited city" award. According to Phoenician tradition it was founded by the God El, and even the Phoenicians considered it a city of great antiquity. Although its beginnings are lost in time, modern scholars say the site of Byblos goes back at least 7,000 years.

Ironically, the words "Byblos" and "Phoenicia" would not have been recognized by the city's early inhabitants. For several thousand years it was called "Gubla" and later "Gebal," while the term "Canaan" was applied to the coast in general.

It was the Greeks, some time after 1200 B.C., who gave us the name "Phoenicia" referring to the coastal area. And they called the city "Byblos" (papyrus" in Greek), because this commercial center was important in the papyrus trade.

Today Byblos (Jbeil in Arabic) on the coast 37 kilometers north of Beirut, is a prosperous place with glass-fronted office buildings and crowded streets.

But within the old town, medieval Arab and Crusader remains are continuous reminders of the past. Nearby are the extensive excavations that make Byblos one of the most important archaeological sites in the area.